For just over a year now I’ve been using the Day One app to keep a journal (diary) on my phone.1 I started out by recording the traveling I was doing; later I started to treat Day One as a kind of private social-media repository too. The way I use Day One hinges on four important differences from the paper journal I used to use:

My entries in Day One fall into two broad categories. Some of them are the kind of diary entries people have been writing forever: I recount interesting things I’ve done, places I’ve been, or people I’ve talked to, and I discuss whatever’s on my mind. The process of writing often helps me to come to some kind of realization or acceptance; just getting the words out is therapeutic.

The other kind of entry I found myself writing—well, making—is more like the ephemeral fluff you’d see on Instagram or Twitter. I do use Instagram but I don’t have any illusions that other people care what my lunch looked like. Now if I’m eating something noteworthy—or if I see anything else that I want to record but not publicize—I just take a photo and add it to my Day One archive. 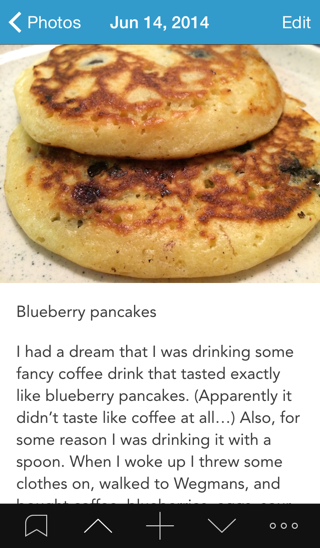 What I dreamed about and what I had for breakfast: two things that no one else should ever have to read.

Day One provides access to Foursquare’s list of businesses and points of interest, so I use Day One as a replacement for Foursquare too: I “check in” at places just by creating a new entry. It doesn’t even need to have text in it; the metadata says where I am and when. There’s no need to broadcast anything to my friends, much less to everyone on the internet.

The same goes for snippets of text. If one of my friends says something funny that I want to record for posterity, I don’t need to cast their comment into the technically- and socially-ambiguous quagmire called Facebook; I can just record it in Day One. (The metadata of where and when this happened is inserted automatically.) I do the same thing if I have an interesting dream, or if I suddenly remember an anecdote that’s worth writing down.

I don’t share my life in public all that often, and when I do I try to make it an honest, meaningful expression of myself. “Posting” the more mundane stuff to Day One instead means that I preserve a lot of memories that would otherwise have just been slowly forgotten.3