OK Go’s music videos are sort of a known quantity at this point. They come up with a concept somewhere between “zany” and “outrageous” and then execute on it unbelievably well. The concepts are different enough that each new video is a revelation.

I’d suggest that their 2016 video for “The One Moment” succeeds not only in making you say “holy crap!” but also, by subverting your expectations, succeeds in a new, emotional dimension too.

The video begins with a couple seconds of whirlwind action—it’s too quick to follow, so all you retain is the last shot, of some guitars exploding. An intertitle spells out the video’s premise: you are about to watch the same bit of action again, but slowed down enough to be watchable.

Slowed down, it turns out, that whirlwind becomes a typically atypical OK Go video. We pan across Tim Nordwind, Andy Ross, and Dan Konopka as they cause various sorts of brightly-colored things to explode. Damian Kulash is soaked by some water balloons in slow motion. The last things to explode are the guitars that the camera lingered on earlier.

The expectation now is that the video is over. After all, each OK Go video is—while certainly not simple in execution—at least simple in concept, and we’ve been given the concept of this one explicitly, in text on the screen. We saw some things happening very quickly and then we watched those things happen more slowly. We ended with some exploding guitars the first time around and now we’re back to the guitars again.

But this isn’t where it ends. 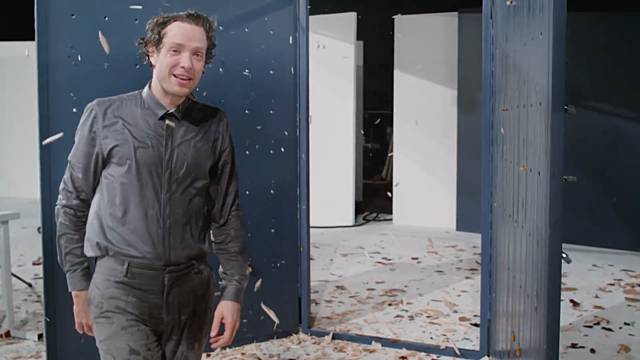 Instead, the camera pans back down to a soaking wet Kulash. He brushes his hair off of his forehead and grins knowingly. As the music softens, he looks directly into the camera and sings, “this will be / the one moment that matters…” It makes the hairs on the back of my neck stand up.

OK Go’s videos are all impressive technically, but despite the fact that the songs themselves touch on doomed relationships, breakups, and dealing with grief, the videos are usually so focused on execution that they only address this emotional piece abstractly. But in “The One Moment”—a song about impermanence, about taking advantage of our limited time by finding a connection to someone else—for Damian Kulash to suddenly break out of the mold of our expectations, to look right at us and smile—that one moment is downright magical.